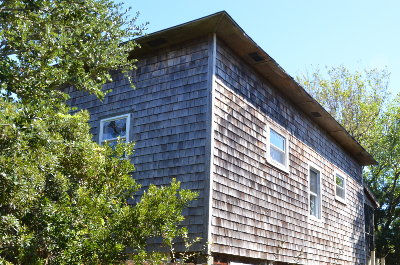 In 1883 the US government established the island’s first Life Saving Station near Hatteras Inlet. Today, only pilings survive near the inlet, wooden sentinels standing silently in the ocean, clearly visible from the decks of the state run ferries. For more than sixty years, brave courageous islanders served in the Life Saving Service, risking their lives in daring rescues when sailing vessels fetched up in raging breakers during storms and hurricanes. In 1915 the Life Saving Service was merged with the revenue Cutter Service to form the US Coast Guard. In 1904 a second station was built in Ocracoke Village, at the end of the “Ditch” (the narrow inlet joining Silver Lake harbor with Pamlico Sound). This is where the Cedar Island and Swan Quarter ferries, as well as pleasure and work boats, enter and leave the safe haven of Silver Lake.

The building behind the live oak tree in front of you served as the original boat house for the village station. In earlier days there was little vegetation between the boat house and the edge of the surf. Mostly sand and tidal flats as far as the eye could see. This was the perfect location for the storage of rescue apparatus. At the call “Ship Ashore” island surf men rushed to this building to hitch up their beach carts (laden with rescue equipment and sturdy row boats) and hauled them, with the help of large draft horses, directly to the beach.

Many a sailor owes his life to Ocracoke men who worked tirelessly in the most trying conditions to save lives, ships and cargos. Today only scattered remains of once massive schooners, brigs, and steamships lie buried in the sand with rusting spikes, bolts, and nuts still holding sections of the ship’s timbers together. More than a few old island homes were built from the lumber that was carried as cargo by ill-fated vessels, or from portions of the ships themselves. 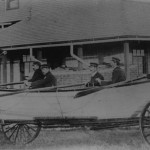 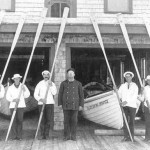 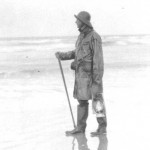