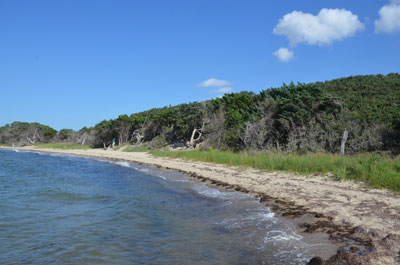 Springer’s Point is the last maritime forest remaining in Ocracoke Village. This 31 acre site begins at its entrance on Loop Road and continues to the shoreline of Pamlico Sound.

The only Outer Banks inlet that has been continuously open since Europeans began keeping written records in the sixteenth century is Ocracoke Inlet. Until 1846 Ocracoke was the primary passageway to North Carolina’s major mainland ports of Bath, New Bern, and Plymouth. However, masters of mainly sailing vessels carrying trade goods from Europe and other colonies were often thwarted here by the constantly shifting channels, shoals, and reefs in Ocracoke Inlet.

In 1715, the North Carolina General Assembly authorized the settling of pilots at Ocracoke Inlet. At that time the coast of Virginia and the Carolinas was infested with rogue sailors, pirates and buccaneers. Ocracoke was a popular destination for these “Brethren of the Coast,” especially for the fiercest pirate of them all, sometimes called Edward Teach, but known to most as Blackbeard.

For fear of these blackguards no honest seaman chose to settle at Ocracoke Inlet in 1715, and the government’s plan to provide safe passage across Ocracoke bar remained only a dream for almost two decades.

Governor Charles Eden, along with the other wealthy and influential early colonists, befriended Captain Edward Teach. In a time-honored tradition, Blackbeard shared his loot with Governor Eden and his secretary, Tobias Knight, in exchange for protection, safe passages in Carolina waters, and general agreement to “look the other way” whenever necessary.

By the 1730’s, Ocracoke Inlet was finally safe for the law-abiding seaman. A small settlement sprang up on the Point. Reflecting the purpose of the new arrivals, the fledgling village of several dozen souls was dubbed Pilot Town. These earliest settlers knew the local waters. Merchant captains approaching the inlet depended on the pilots for safe passage over the bar, expert guidance through the narrow channels, and sometimes transfer of cargo to lighter vessels capable of navigating the shallow waters of Pamlico Sound.

In 1790, about 135 people called Ocracoke home. By the 1830’s the number had risen to approximately 350. When Hatteras Inlet opened in 1846 ship captains soon discovered that it was more navigable than Ocracoke Inlet. Commerce quickly shifted there, heralding the decline of Portsmouth Village, on the south side of Ocracoke Inlet, and hastening the development of Ocracoke Village around the north shore of Cockle Creek (now called Silver Lake harbor), as residents moved from the Point.

Between 1870 and the early twenty-first century Ocracoke’s population rose from about 550 to more than 750. Time, erosion, and storms have removed almost all evidence of the earliest settlement on the Point. A few bricks, shards of pottery, an occasional pipe stem, and unmarked graves are all that remain from the eighteenth century.

Today the narrow path meanders into Springer’s Point, passes under a canopy of live oaks and cedars, continues past the grave of Sam Jones, twentieth century owner of the Point, passes alongside the base of an old brick cistern, and emerges onto a sandy beach at Pamlico Sound. In the hush and quiet of this tranquil retreat one can barely imagine the bustle of activity that one time enlivened the Point. Houses, wharves, warehouses, stables, a blacksmith shop, and even a windmill graced this land as men searched the horizon for the sight of masts breaking the horizon, women tended to home and garden, and children played and swam in the gentle waters nearby.

If you choose to explore Springer’s Point, simply follow the designated path, and enjoy a leisurely walk through a delightful undeveloped area of the village. Please note that there is no automobile or golf cart parking at Springer’s Point and bicycles are not allowed past the information kiosk. There is, however, a bicycle parking rack for your convenience. Swimming is allowed at Springer’s Point. 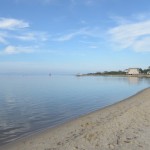 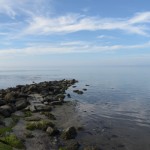 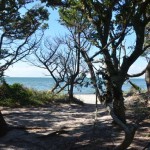 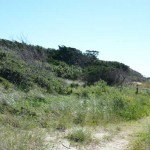 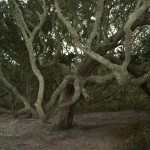 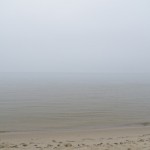 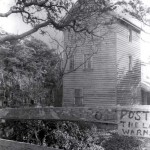 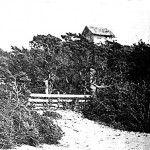 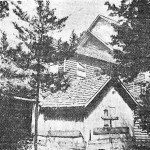 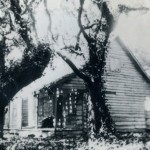 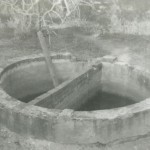 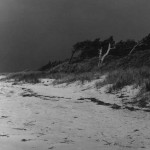 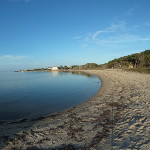 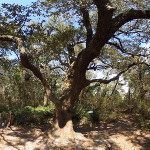 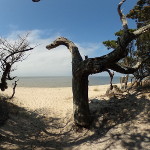 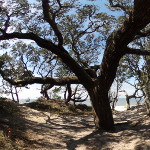 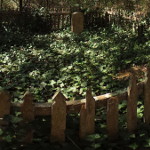 The North Carolina Coastal Land Trust would like you to know that Springer's Point has no parking for automobiles or golf carts. Bicycle parking is available and only foot traffic is allowed beyond the information kiosk. Additionally, all dogs must be leashed at Springer's Point.