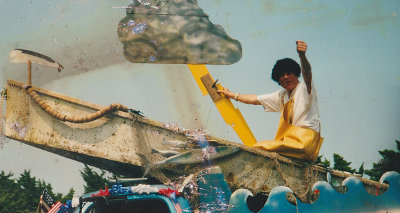 The story of Old Quawk has been told on Ocracoke Island since at least the early nineteenth century.

In the late 1700s or early 1800s, a man of indeterminate origin made his home on Ocracoke Island. Several miles north of the village, on a small hill, or hammock, he built his simple home of bull rushes and driftwood.

He  had arrived on the island, some said, on a schooner from a distant land. Others claimed he had been shipwrecked on the beach and had decided to remain here. It was even rumored that he had once been a pirate. At any rate, he was different from the other residents. Not only was he dark skinned (some think he was African, West Indian, or perhaps Puerto Rican descent), he was often surly and disagreeable, preferring his solitude to interaction with the rest of the island community. When he got excited or argumentative people thought he squawked like a night heron. Hence the nickname, Old Quawk. No one seems to have known his given name.

Like the other men of the island, Old Quawk fished nets in Pamlico Sound. One year on March 16 the wind picked up, the sea ran rough and storm clouds gathered on the horizon. Concerned about their safety, island fishermen agreed not to venture out in their small sailing skiffs.

Only Old Quawk disagreed and set out in his small boat to salvage his catch and his equipment. Old Quawk and his boat were never seen again.

For more than one hundred and fifty years seafarers from Ocracoke have paid respect to the memory of Old Quawk by staying in port on March 16.

Old Quawk lives on in the names of landmarks near where he made his home: North Carolina Highway 12 crosses “Old Quork’s Creek” several miles north of Ocracoke Village. Nearby is Quawk Hammock, a modest hill where Old Quawk spent his last years.