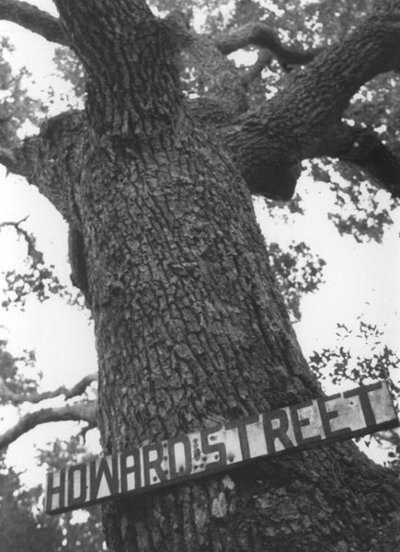 Ocracoke had its first automobile accident in September of 1925 on what is now Howard Street. At the time, there were only two automobiles on the island: a flat bed truck owned by Captain Bill Gaskill, owner of the Pamlico Inn and another truck owned by Albert Styron, operator of the general store. Both trucks were model T’s with narrow tires, unsuited for driving the soft sandy roads of Ocracoke.

Early on the morning of August 23, men of the Coast Guard patrol were awakened by the cry “Ship Ashore.” Rushing to the scene, they found a four- masted schooner hard aground in the surf. All seven sailors were safely rescued. Shortly thereafter, the schooner broke apart in the pounding waves, her cargo of rough cut pine lumber spilling out into the Atlantic Ocean.  During the next week, large quantities of lumber washed up along the beach and an agent from the shipping company came to Ocracoke to organize salvage operations.

Captain Bill Gaskill and Albert Styron were hired to drive out to the beach and collect as much of the lumber as possible. A steamer, requisitioned to load up the rescued lumber, tied up at a dock in the sound on the northwest shore of Ocracoke Village.

For several days Captain Gaskill and Mr. Styron drove their trucks piled with lumber back and forth from the ocean to the sound. The one lane sandy road included a sharp bend where loose sand was especially deep. To negotiate this curve without getting stuck, the drivers of the trucks had to accelerate and maintain high speed as they rounded the blind bend.

On one of the trips between the ocean and the sound, the men, coming from opposite directions, approached the curve, gunned their engines and had a head-on collision.