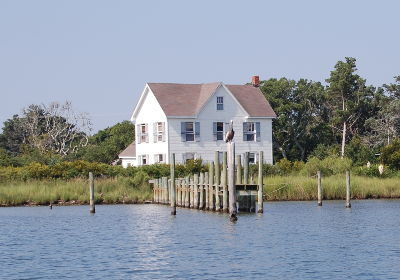 Captain Bill Thomas was a New England sea captain who married an islander, Miss Elizabeth (Lyzee) Scarborough. While anchored in the harbor of St. Kitt’s in the Caribbean, Captain Thomas spied a stately home with a wide veranda. Immediately he determined to have a replica built for himself and his new bride back on Ocracoke. He took up pen and paper, and sketched every detail of the house, including the prominent center cross-gable, wooden shutters, and distinctive saw tooth facia boards.

Back home on the island, Captain Thomas contracted with his brother-in-law and local carpenter, Mr. Charlie Scarborough, to build his new home. Capt. Thomas had all the lumber brought over to the island from the mainland, and Charlie built the house for $50.00.

In the devastating hurricane of 1899, one of the worst ever to strike the island, rising tide water had surrounded Charlie’s house and eventually washed it off of its foundation. Determined to prevent this from happening to his sister and brother-in-law, Charlie added a trap door in the floor of Captain Thomas’ and Miss Lyzee’s parlor (the first one specifically added to an island home to let the sea water in during a storm).

The trap door did its job in the terrible storms of 1933 and 1944. However, the latter hurricane tore away the original two story front porch, never to be replaced. At this time asbestos shingles cover the original wooden siding, but much of the interior, including bead board walls and ceilings, wide molded trim, an open-string staircase, and four panel doors are original to the house. 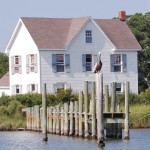 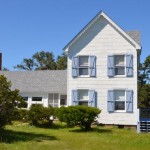 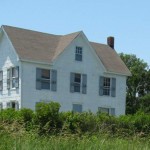 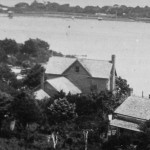 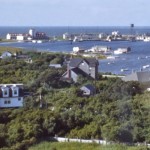