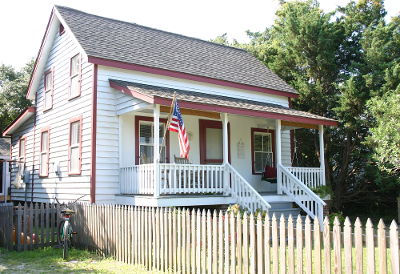 This house is representative of the basic island home, the historic “story and a jump,” a diminutive frame house, one and a half stories high. In typical fashion, it has a front porch and a one-story shed addition in the rear.  It was built ca. 1860 for Thompson Bragg (born ca. 1837/38), who never married, and it originally sat where the School Road lies now, not far from NC Highway 12. In 1893 it was moved to its present location as a wedding gift to Homer and Aliph Howard.

Homer and Aliph Howard had 13 children.  Although only eight of these children lived to attain maturity, all of them were born and reared in this 1000 square foot home.

The house was heated, first by wood, and later by a kerosene space heater. There was no indoor plumbing and the kitchen was a separate building connected to the rear of the house by a wide wooden boardwalk. Aliph prepared meals on a cast iron wood-burning cook stove. Family members obtained water from a pitcher pump that was connected to a large round wooden cistern.

In the mid-1930’s the small open porch on the rear shed addition was converted to an indoor kitchen.  And in the mid-1950’s a small bathroom was added on the first floor, the roof was replaced, and plywood was nailed to all of the floors and to most of the walls and ceilings.  Otherwise, few alterations were made.  As a result, although the house shows the effects of nearly 150 years of wear from humans, critters, and storms, it remains remarkably well preserved.

Many island homes in the nineteenth century were constructed from materials salvaged from schooners that wrecked on Ocracoke’s beach.  These and other historically significant structures are included in an area of approximately 200 acres around Silver Lake harbor.  In 1990 the Ocracoke Historic District was established, with more than 200 contributing structures identified.

The Bragg-Howard home is one of these contributing structures.

Next Stop – The Island Inn 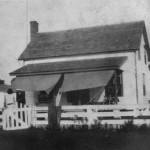 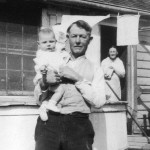 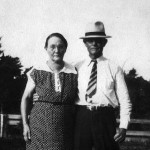 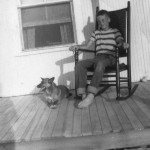 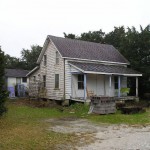 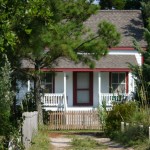 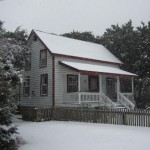 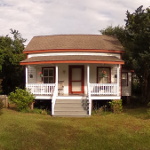